The illusion of the life-size Finn. 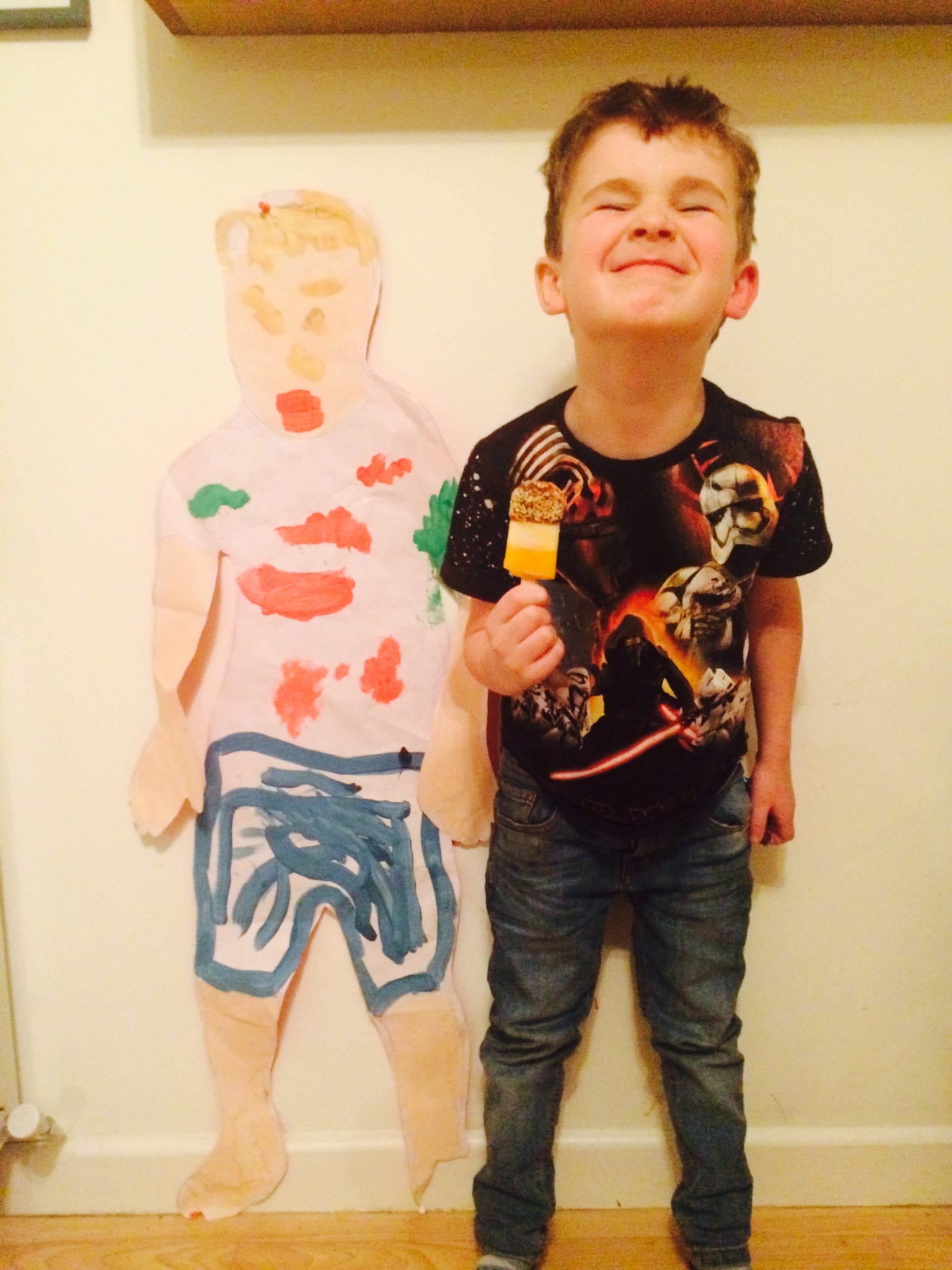 One Friday, our four year old son brought home a life size self portrait from nursery. He told us how all the children had lain on a big sheet of paper. The teacher drew around them and cut out the shapes then the children painted in their clothes and faces.

Finn was really proud of his painting. He had managed to do some light brown hair, eyes and nose and a red smudge for a mouth and some blue and red smudges to fill in the t-shirt and shorts. We pinned it to the wall of the kitchen with the feet of the painting level with the floor so that it was his actual height.

Then we went away for the weekend.

When we returned my husband dropped me off at home while he took the kids to pick up some groceries. I walked into the kitchen with the cases and screamed out in horror at what I saw.

There standing against the wall, was my son.

"Oh my dear God" shrieked the panic in my head, "We left him at home. ALL WEEKEND. How on earth did we do that?" I felt like I had been punched in the stomach. I could barely stand.

For that brief moment I had been utterly fooled by what was not there.

I'd like to say that was the end of it but rather ridiculously, for at least another two weeks, it wasn't. I'd go into his bedroom, kiss him goodnight, come downstairs and be horrified to see him there in the kitchen. Or I'd see him in one room and do a bewildered double take when he had suddenly been transported right in front of me. I'd drop him at school, arrive home, there he would be.

Eventually, I got used to the painting. I would see it, even in the corner of my eye, even as a blur of brown hair and red t-shirt, and know that it wasn’t Finn. There was no shock or momentarily bewilderment. There was just simple knowledge. Painting.

I look at this painting and I love it. It was created by a boy with brown hair and brown eyes that I adore.  I love him and I love what he has created.

And, yet for a while, I reacted to it with horror, shock, confusion, bewilderment. This was temporary madness.

We all have this madness from time to time. It might last half a second, two weeks, two decades or a lifetime.

The feelings of horror, fear, anxiety, concern, anger are telling us we are temporarily mad. We are believing that something outside of us has the power to make us feel these things.

When I find myself again in madness (and I will of course) and it might last half a second or decades, I will keep reminding myself (when I remember to do so), "It's a painting. It's a painting."

And eventually, even if it takes what seems like a ridiculously long time, I will see it for what it is.  And when I really see it, I will love it. There is no other way.
By Clare Dimond
Under Uncategorized
3 min read
Share Tweet Share

There are no comments yet. Be the first one to leave a comment!